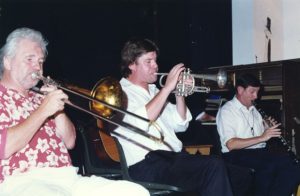 With commendable self confidence, the committee opened proceedings with a successful visit by Tom Baker’s Swing Street Orchestra at the Hideaway restaurant in Bega, with a net profit of $147.74. If only subsequent committees could make a similar boast!

A very fine start to the Club’s programme, by any standards.

Visiting band members always stayed at the Cursley’s, Gordon’s and Percy’s and very many late nights ensued. One night, at the Cursley’s Lyn Wallis went missing and John Cursley eventually discovered him lying on his back in the front yard. Lyn then proceeded to bring John’s attention to the wonderful stars above Bega!