The formation of the Down South Jazz Band in 1978 by Jiri Kripac introduced some sort of frequency to jazz performances on the Far South Coast , with fairly regular gigs at various locations such as the Bank Hotel in Bega and the Top Pub in Pambula. Tuesday was practice night at Wolumla Hotel, usually attracting 10 to 15 people. The band comprised Jiri Kripac (trumpet and leader), Barry Pascoe (trombone), Monique Lysiak (clarinet), Gordon Brown (piano), John Moffatt (sousaphone), Bill McLean (banjo) and John Cursley (drums). Pat Thompson (Madam) sang regularly with the band until it disbanded in 1985.

The band was even invited by the Victorian Jazz Club to perform for them over one weekend, which they did most successfully. 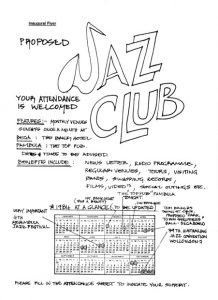 On another occasion, the band was playing for a fancy dress 40th birthday at Nethercote. At 12pm they began to pack up when a 6ft 4in burly abalone diver called Harco, dressed as Superman, strode over and questioned the finishing time, insisting, in the deepest, roughest voice, it was 1am. The band, being totally convinced by his argument, started playing again and John Cursley asked Barry Pascoe, who was somewhat upset, “what will we do if he wants us to play until 2am?” Barry briefly stopped playing and quickly said out of the side of his mouth, “We’ll play till two”.

1981 saw the inauguration of the Merimbula Jazz Festival, which brought increasing numbers of expert jazz musicians into the area annually, and allowed local jazz enthusiasts to get to know these musicians personally. It also, in time, brought an urge in these fans to listen to jazz on a more regular basis, with local musicians as the backbone and visiting musicians invited with their bands or as front liners with the locals.

The catalyst in the formation of the Down South Jazz Club was the arrival in Bega in 1984 of Sydney Jazz buffs Frank and Wendy Percy, who had the enthusiasm and know – how to set up and run a jazz club. A committee was formed, a constitution drawn up and the Club came into being in April 1984. Mention should be made of those members of the inaugural committee, whose enthusiasm and self belief ensured there is now a thriving Down South Jazz Club. The committee comprised: