In an early Newsletter, the president highlighted the poor attendance of Club members at most functions, commenting that only 20 turned up to the last function at the Hideaway. He warned that unless attendances at the Hideaway and Kameruka improved, these venues would be lost to us. 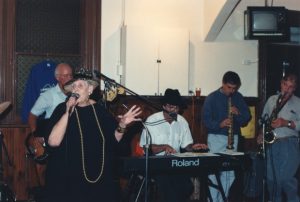 An experimental get-together with jazz clubs from Canberra, Sydney, Illawarra, Kiama and Narooma was held at the Steam Packet Hotel, Nellingan on Sunday 13th April. Many bands including the DSJB, musos from Canberra, Madam Pat and her band and many others provided the music. It was apparently a rip roaring success, with around 300 present.

Gigs were introduced at the Cobargo Hotel and Tathra Surf Club, for some reason known as “Sippers”. (John Cursley explains: “nippers” are young members of surf clubs. “Sippers” were the 5pm – 9pm Sunday drinkers at the Tathra Surf Club).

A Club badge was issued, but abandoned for later years on the grounds of cost.

Windcheaters in blue with a gold “Down South Jazz Club” logo were purchased from Tulgeen Industries in Bega. Wendy Percy supplied and attached an embroidered music note to each of the first garments purchased. As there were only a few, they were prized as indications of founder membership.

This year heralded the real start of the “bucket brigade” at the Yellowpinch Picnic at the end of the Merimbula Jazz Festival, in which raffle tickets were sold with great enthusiasm to the picnickers. Reference to the appendix will indicate just how much the Jazz Club has relied on this raffle to keep afloat financially. It is mostly the same team today continuing the tradition, so – to take the opportunity to plug – any new volunteers will be most welcome and a lot of fun is guaranteed.

The following bands were “imported”

Claire Hansson was a much acclaimed sit – in at the Ball. Life membership was presented to our very distinguished Pat Thompson by President Terry Hayes.

The editor happily recalls the look of horror and disbelief on the face of President un – faze Hayes when we arrived at Sinbad for the Recovery Cruise to discover their liquor licence had not yet come through and the ship was dry! Naturally, the cruise was delayed whilst the situation was rectified.