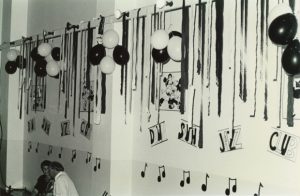 The number of “imported” musicians was reduced by around half because of losses sustained in previous years. Bank balance fell to $144 at one point during the year.

Founder members Frank and Wendy Percy returned to Sydney, with loss of their enthusiasm and organising talents to the Committee. Frank Percy was appointed Life Member of the Club in recognition of his unstinting work to get the Club off the ground. 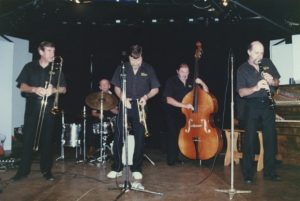 Pat Thompson and her band undertook their first overseas tour to London, Edinburgh, Frankfurt and Holland. Its success may be judged by the many subsequent tours demanded by Pat’s overseas fans.

“Non – Club” Jazz was re-introduced to Kameruka, with the Andrew Ferguson Quartet playing on the afternoons of Candelo market days.

The following visitors played for the Club in 1987:

The Benny Goodman night was acknowledged by all to be unforgettable, with brilliant clarinet playing by Paul Furniss and superb vibraphone work from Glen Heinrich, ably backed by our local musos. John Cursley found it difficult to move his arms for the next week after his frenetic drumming on Sing, Sing, Sing.

Due to previous bookings, the committee broke with tradition in holding the annual ball at the Black Dolphin instead of Twyford Hall. Special efforts to make the venue attractive included beautiful table decorations in the form of black cardboard silhouette stands of musical instruments, lovingly made by Avis and Robin Willis.The ball was a great success, but a consensus of members demanded a return to Twyford Hall in future. Perhaps another reason was the portable dance floor at the Dolphin caused more cursing and swearing during its temporary installation than a golf round.