Membership increased dramatically to 142. Membership charge increased from the original $10 to $12.

Jazz Club banner for parades brought up to date and a new JAZZ backdrop curtain provided by Clare Gordon after the previous one was stolen.

In December, John Martin was appointed Public Officer in place of John Moffatt and the principal place of administration changed to 5a Collins Street, Merimbula.

Bottom Pub monthly functions went from strength to strength. It was decided to pay the bands a nominal sum ($20 per head, with visitors payment at the discretion of the organiser). In lieu of charging admittance (which would have been difficult owing to the number of entrances to the Willows), a raffle was run, the prizes being a choice of a tape or CD. Sometimes a prize of a bottle of wine was offered by the publican.

A cheque from the Festival Committee was presented to the Club and an amplifier, worth around $800, made available for its use.

John Cursley left the district, with his enthusiasm and knowledge being greatly missed.

Col Gould authorised to set up a photographic and Newsletter library. 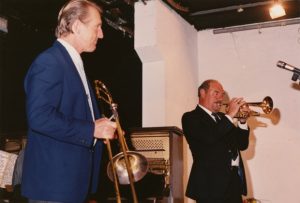 The Newsletter commented that the Jumping Jazz Cats, a popular swing style group from Canberra, entertained an appreciative audience of around forty at the Hideaway. As around one hundred were required to break even, it was observed that the Club lost most of the profits from the festival raffle in one evening.

The Black & White Ball attracted over 120 people to Twyford Hall – a record for the Club. 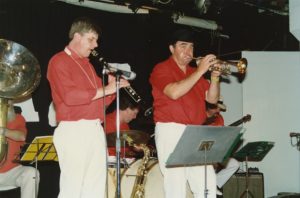