The Willows performances took on an established format, commencing at 8pm and continuing until around 11-ish. Around 10pm, publicans Trish and Joe served a free light supper, which was greatly appreciated by the band and audience alike. Providing the audience totalled more than forty, a raffle was conducted. Prizes were originally records, later tapes or CDs. Considerable care was taken in the selection of these prizes to try to give members a wider experience of jazz. At the Christmas party, the Club contributed to the cost of the supper to provide something a little more substantial in recognition of the occasion. Father Christmas usually made his appearance about then. 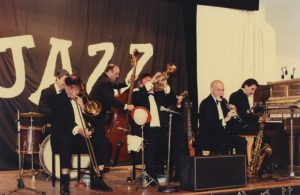 Various local bands took turns apiece to appear at the Willows and sometimes visiting artists were booked to augment the local bands.

Mark Westwood left the area and relinquished editorship of the Newsletter, a job he had performed with distinction since 1989. Col Gould, Bob Wade and Margaret Howard continued the good work.

The following visiting artists performed for the Club during the year: