The following bands performed in the early months of 2004: 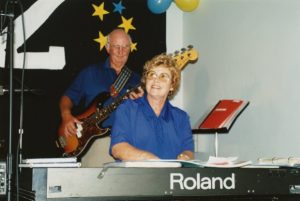 Further discussions were held with the Hotel management regarding poor attendance at gigs. A questionnaire requesting comments on location, food and drink menus and prices, services and the type of jazz being offered was included in the Newsletter. Follow –up meetings with management are planned.

The jazz discussion group proposal was resurrected as hotel management had offered the use of their sophisticated facilities for screening and playing videos and CDs. Again dropped through lack of interest.

It was decided to relinquish rights to the title “Down South Jazz Band” on the grounds of expense and difficulty in monitoring its use.

The Sapphire Coast Concert Band now has 50 playing members and its repertoire and demand for performances continue to grow. Mike Lackey is our liaison officer.

At the time of updating the Club history, the Club is in a very satisfactory financial state (see appendix B), enabling us to subsidise top class functions for a considerable time, even allowing for reduced attendances. It is the intention of the Committee to continue to invite leading bands and musicians for the foreseeable future, thus maintaining the enviable position of the Club within the jazz community and with musicians in particular.

Negotiations are proceeding to bring bands such as the 10th Avenue Jazz Band (USA), the Swedish Jazz Kings (Sweden), and leading Australian bands and musicians to the Club during the rest of the year. The Committee recognizes the good compromise of having top rate front line musicians backed by local musicians which provides our locals with the pleasure and experience of playing with high quality visitors and seems to please the audience as well.