A substantial fall in membership occurred , from 204 to 183

We were fortunate to engage the following bands during the year: 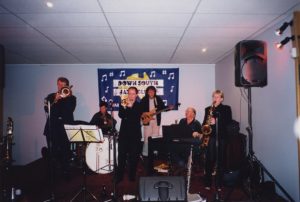 Low attendances during the year continued to worry the committee. Visitors rescued the situation many times and, to try to attract more, efforts were made to inform them of our functions by interviews on the ABC, additional posters in caravan parks, etc. It also appeared that changes in the hotel food menu and prices had an adverse effect. Hotel management produced flyers, which were sent to members along with our newsletters, to explain to members what they were trying to accomplish.

For several months, activities were transferred to the Bowling Club while renovations at the hotel proceeded. The Fiambre gig was well attended at the Sapphire Room (probably boosted greatly by local supporters of the band) but the excellent Sapphire Sextet attracted a poor response in the basement.

The Sapphire Coast Concert Band membership increased to 39. A regular weekly rehearsal is held and with the band reputation growing, performances were being requested at many official gatherings.

To our great sorrow, our much – respected Newsletter Editor and former Treasurer, Neil McGill, passed away after a year long fight with cancer.

As the bank balance was in a very healthy state, it was decided to pay the Christmas Party musicians $50 each.