The following bands played for us during this year: 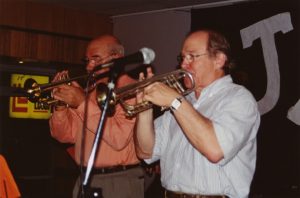 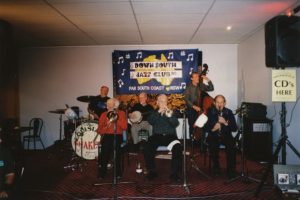 Because of an abnormally high bank balance and to encourage bigger attendances at our functions, it was decided to reduce admission fees back to $5/$10 for visiting bands or

Front liners, making admission charges the same for all categories. However, international bands and expensive Australian bands will be considered on a case to case basis.

Investigations were conducted into improving band lighting and also tidying up the speakers layout by installing brackets on the walls. Progress delayed until the Hotel sale was completed.

Existing rapport between the President and Andrew Ogilvie of the ABC was considered to be very important from an advertising viewpoint and should be encouraged.

The Committee agreed to sponsor and encourage the formation of a concert band largely comprising young musicians. The band would operate as a sub committee of the Down South Jazz Club in the same fashion as the Festival Committee and would benefit from our insurance protection and incorporation benefits. A special annual fee of $5 was agreed upon. The band will be known as the Sapphire Coast Concert Band.

Initial meetings were held with the new hotel management who were happy to allow things to carry on as before. However, changes may be introduced in the future.