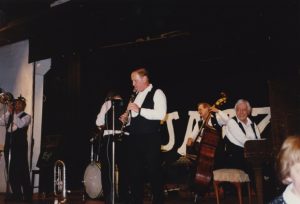 The following were the special events during the year:

The post-festival bash at the Willows became an annual event, with mostly the same line-up of locals and visitors.

The attendance of 90 at the Black & White Ball was quite disappointing, considering the composition of the band. However, the Merimbula Spring Festival Committee had organised a pre- Melbourne cup night, complete with Calcutta and the works, at the Grange on the following Monday night (two nights later), which attracted over 250 people. No doubt a fair number of our normal customers would have been included in that figure. The Committee resolved to keep our ball date well away from the Melbourne cup weekend in future.