Membership was maintained at 104.

Joe & Marea Speer were elected joint Newsletter editors at the AGM, a task they carried out very ably for twelve months.

In November, the musicians basic fees at the Willows were increased from $40 to $50.

The basic prize for the Members Attendance Jackpot was increased from $10 to $30. The $30 would remain static for three months if not won and then jackpot to a maximum of $100, as before.

The following were special events for the year: 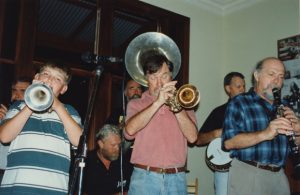 Regrettably, the attendance at the Ball was appalling, only 43 participating. We tried to cancel at very short notice, but the band had turned down a big night and , being working musicians, would require the agreed hire fee as a cancellation charge. So we went ahead with the show which was exceptionally good musically. However, after spending several hours decorating the hall, only to lose $1,100, the Committee changed its views on the subject of holding a future ball. In October, the Committee voted to abandon the Black and White Ball.

Six weeks later, another wonderful night was presented, but this time we made a profit! The Swedish Jazz Kings put on a brilliant performance, which left the audience entranced. Note this and refer to a repeat performance in 1998. It sure is hard to predict how our locals will react to a show! Incidentally, Pat Thogersen did a marvellous job decorating the tables with little Swedish flags, etc (which totally charmed the band) and also acting as MC.

During the year we had been steadily losing money at the Willows gigs. The band costs were reasonably constant but our sole source of income was the raffle. If the attendance was poor, raffle income was also poor and some nights there were so few in attendance that we didn’t even hold a raffle. (The raffle prizes cost more than the takings). The Club only kept afloat financially because of the generous annual donation from the Festival Committee and the proceeds of the festival raffle itself. (Note: In December and January, charges of $3 and $5 were actually made at the Willows).

It was suspected the attendances were low because the same local musicians were being presented, with only occasional performances by visiting musos. Financially, we could not change this situation due to lack of funds.

A special meeting was called to discuss this situation , the result being, for various reasons, that we should try a new venue. The Lakeview Hotel, Merimbula was selected for the first trial run in April,1997, the band being the Down South Jazz Quartet with Bob Porter, John Moffatt, Bill McLean and Walter Brunton. It was also decided to charge visitors $5 more than members for all future gigs, with members of other jazz clubs paying $2.50 more.