Local bands played on the third Thursday of each month early in the year at the Willows and later at the Lakeview. These bands were mostly: Down South Jazz Quartet, the Sapphire Coast Quartet and the Down South Six.

In November the Club effectively lost one of its very best musicians when Joe Stokman had a stroke which interfered severely with his playing. We live in hope that Joe will fully recover, to entertain us once again. 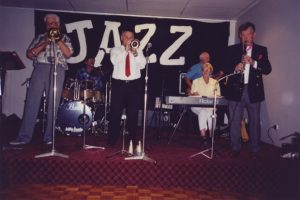 Arrangements at the Lakeview were placed on a more commercial footing than the Willows. The basic agreement was that for ordinary nights, members would continue to get in free, but visitors and non- members would be charged $5. Members of other jazz clubs would pay $2,50. We would run a raffle . We would be responsible for the band and would pay for it and the Lakeview Management would make a contribution to us.

On special nights, for instance when a visiting band was being presented at a much higher cost, members would be charged an admission fee, with visitors paying an extra $5. By arrangement, band meals and accommodation would be provided by the hotel as part of their contribution.

From the start, this arrangement has worked well, with many gigs breaking even, others showing a small profit or loss. After a very auspicious start, attendances during the winter tended to fall off. What was more worrying was that out of a typical audience of 50, only about 25 were Club members, from a Club membership of over 100. Enquiries to non – attendees brought responses such as “There is too much sameness about the music” and “There is no atmosphere in the pub”.

The Committee resolved to try to create atmosphere by decorating the tables for the Christmas party and altering the lighting, and to try to provide visiting artists or bands every second month, with local bands providing the music on alternate months.