During the year, membership increased to 188, the best figure since 1984.

The quality of sound at the Lakeview left something to be desired. After some experimentation, a good solution resulted from the use of George Pitt’s speakers on the stage, on stands built for the purpose, with one of the Club’s speakers used as a fold back unit and the other mounted on the right hand wall near the entrance.

During the year, the Committee did their best to adhere to the decision to present visiting artists / bands on alternate months with local bands. The visitors were: 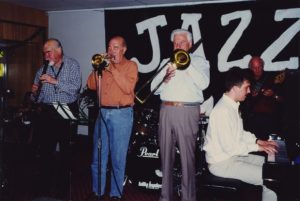 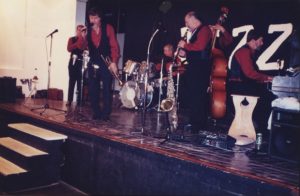 The wonderful array of talent presented during the year must have matched that of many of the much larger, well established jazz clubs in capital cities. Our audience seemed to appreciate it and numbers attending and, more importantly, the numbers becoming members, grew in a most encouraging manner. The number of members attending the Bob Barnard night in December was 122 out of 139, certainly a record for the Club.

On the negative side, the attendance at the Swedish Jazz Kings function, again jointly presented with the Bega Arts Council, was very poor, resulting in a loss shared by the two organisations of $2,220. Considering this band is rated as one of the top trad jazz bands in the world, and the previous performance received rave reviews, it is difficult to know what to put on to obtain the approbation of the Club members.