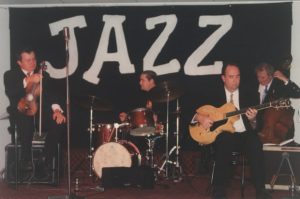 The following bands entertained us during the year at the Lakeview Hotel:-

Carbon Copy were appointed as printers. This was an inspired move as we have enjoyed much helpful assistance over the years from John and Peter Spinks. Neil McGill designed a new advertising poster.

A new sound system was purchased for $6,100, complete with fold back speakers and an auxiliary speaker at the rear right side of the hall to eliminate the sound barrier effect on that side.

Long serving auditor Ron Doyle was forced to resign due to ill health and Stephen Clarke appointed in his place. Mr & Mrs Doyle were elected life members of the Club in recognition of Ron’s sterling work over the years.

To combat the effects of the GST, the Merimbula Jazz Festival Sub Committee separated from the Club.

The musicians attending the Peter Horton Memorial Concert referred to above

On a sad note, the 17 August gig filled at short notice by the Lakeview Allstars, was meant to be – Carol Ralph with Roger Janes, Sandro Donato, Karl Hird with Margie, Tony and Ken. Unfortunately, the day before, Roger Janes received severe injuries in a car accident, from which he ultimately died.